If one area of your life is going well there's usually another area that is not so swell.  Work is going pretty well, despite the looming theory that once we have this website where it should be we'll all be out of a job.

My home up-do is still in progress.  To date I have taken 4 large garbage bags of clothing to the Salvation Army store near my house.  Today's haul included over 40 t-shirts, 10 turtlenecks and a bunch of sweaters.  I'm trying to envision the space my new bedroom furniture will provide and scale back to fit that need.  Besides, who in their right mind needs 60 t-shirts anyway.

As I type this post I'm hearing strange noises coming from my refrigerator -- pay no attention.  It will go away if you ignore it.

Today my insert came for my new Gidget table from Leah Day -- woohoo!  Wait, there's no place to set the table up yet - damn.  Premature excitement.

When you're moving things around in a small house, or tiny house as my friend Sue likes to call it, it's hard to shuffle things around and stay happy.  Once my new bedroom is painted properly, the electrician can come back and hang the new super-duper ceiling fan and replace the wall outlets with a clean white version.  Next the furniture either needs to be delivered or I'll have to go get it - whichever is less costly and easier on me, which means I will probably pay to have it delivered from Grand Rapids.  With any luck the new Saatva mattress I ordered will arrive shortly thereafter.  In the meantime I will shop for new bed linens.  Did you know that Costco, my favorite store in all the world, does not carry full sized sheets or mattress pads?????

I'm also trying to decide if I want my floors re-done in my new bedroom.  Kevin's bunk beds took a toll on the floors.

I'll have to think on it.  Looking forward to a good night's sleep.
Posted by Suzanne at 10:16 PM 7 comments:

Yesterday I had a 'painter' come to the house while I worked at home, to paint my soon-to-be bedroom.  It was a simple task.  A small 10x10 bedroom with a bit of water staining on the window side ceiling.  Ya know what?  It was all downhill from there.

If I didn't need it fixed and fixed fast I would probably cry but there's no time for crying.  Bigger fish to fry.  Must. Be. Fixed. Now.

My new bedroom furniture from Custom Cottage will be ready on June 6th.  The painter will be returning from his vacation to Holland on June 6th, hence the need for another option.  I'm hoping my friend Mary's husband can fix it or give me the name of a RELIABLE alternative.

My Mom would tell me two things at this point:  1. You get what you pay for.  2. Cut your losses.

I sure miss her, she would commiserate and tell me 'this too shall pass'.
Posted by Suzanne at 9:43 PM No comments:

Last Sunday I drove to Cedar Rapids, Iowa, for the International Machine Quilters Association Conference.  I had only learned about it the previous Thursday.  I found they had sit down longarm machine quilting classes -- something I hadn't seen offered anywhere else.

When I got to the Doubletree Hotel I discovered that a crowd was gathering for a Slipknot concert.  They were definitely not my genre of music -- scary indeed.  I had a quick dinner and escaped to my room.  The conference organizers called me to say my first class on Monday would be cancelled because the teacher couldn't arrive on time -- bad weather cancelled her flight.  Argh!

I made the best of it by traveling to a couple of quilt shops in the area.  One was in LeClaire, IA and it happened to be right in front of American Picker, the antique shop that's on TV.  They were filming so I couldn't go in, pooh!  I found a few things at the quilt shop though, had lunch and then headed back toward Cedar Rapids, to another quilt shop.  Fabulous store, great employees, tried out the new Bernina Q20 -- A-M-A-Z-I-N-G machine.  It has two stitch regulator sensors and it's impossible to not stitch evenly.  Oh, the price including the table is a just short of $12,000 -- ouch!

Here's my haul from the two shops: 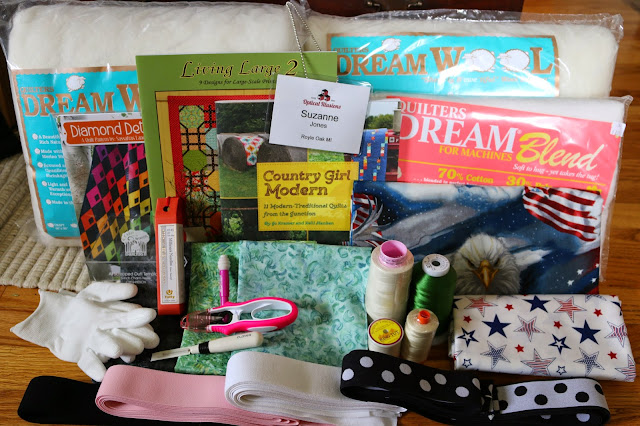 As my mother would say, no one in the world can spell anymore.  Should be Royal Oak - ugh. 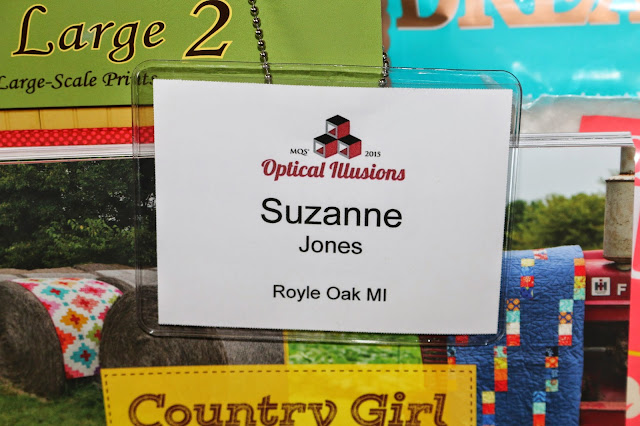 My evening workshop was great but I didn't have time for dinner so I had grabbed another cookie at the front desk on my way to class.  I met a very nice gal who was taking all of the same classes I wanted to take.  It was good to meet someone with similar interests.  Even our work history was similar.  We've corresponded since then and I'm sure we'll meet up again.

My Tuesday morning workshop involved using rulers in machine quilting and I never would have had the confidence to use rulers had I not taken it.  I ordered a bunch of rulers from AllBrands.com -- great prices!

No update on my Juki QVP yet -- the store is supposed to call me tomorrow or Tuesday.
Posted by Suzanne at 11:15 PM No comments:

I've yet to receive my Juki TL2200 QVP quilting machine and table.  Can you envision me tapping my feet in anticipation?  There is a firmware update that I've requested they make before they ship.  That way I won't have to do it once it arrives.

I should be able to have my bedroom painted by the 19th and with any luck my machine will arrive shortly thereafter.

In the mean time I stopped at a quilt shop today to catch the last day of their going out of business sale.  I focused on acquiring more Jason Yenter solids, which I LUV, and found a backing to use on the quilt I'm going to make for my new bed, which should arrive mid-June. 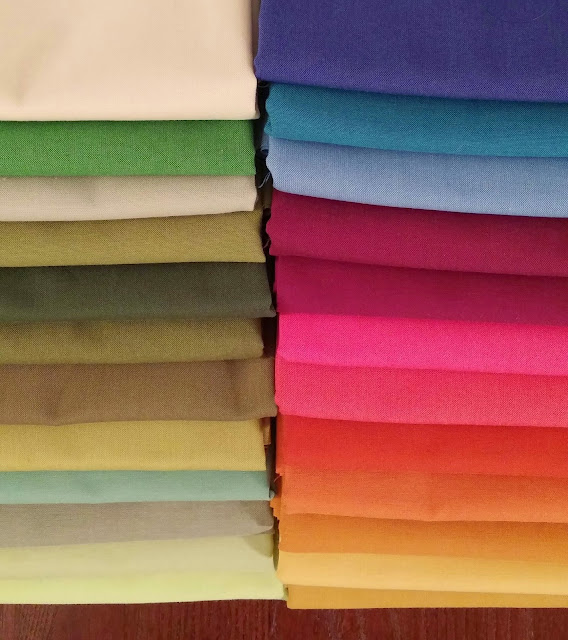 And before you ask, no, I don't have a project in mind for these beauties.  Yet.

I had a fabulous visit with both of my children today, celebrating Mother's Day a tad early.  I went to lunch with Holly and her family.  My grandkids are just the best: 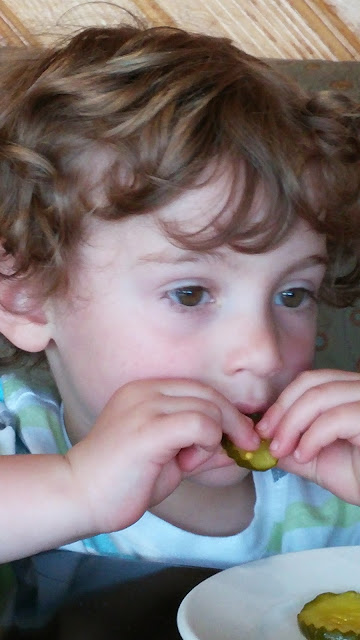 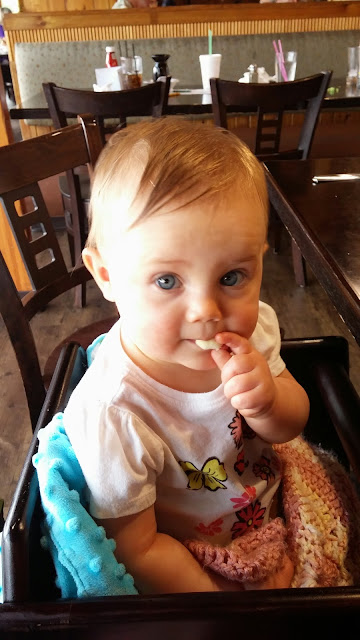 See all that mess on the table behind Lilly?  That never did get cleared while we were there.  Oddly it seems they were short on both servers and busboys.  The food was terrific and the company even better.  So nice to see my little cuties!

Even though my Mother is no longer here I know she is watching over us all and approving how we've managed to go on without her.  I'm trying hard to focus on all the good memories and not dwell on her absence.  If you are fortunate to still have your mother with you I hope you are doing something wonderful with/for her tomorrow.  And to all my friends with children - Happy Mother's Day!

Back on April 14th I took the plunge and ordered a Juki TL2200 QVP sit down machine and table.  I took advantage of a Spring sale but it hasn't proven to be a great experience thus far.  First I checked my order's status online and all I saw was Order Approved.  Really?  It was supposed to be shipped by that Friday according to Nedra, who took my order on the 14th.

Still no status change and then I called them.

Oh, they were conducting a sewing test on the machine so it wouldn't be shipped until the following week.

Okay.  But then on April 24th, when my status was still Order Approved, I called the store again only to discover that the table was faulty and a replacement would have to be ordered.  Hmmm, you mean to tell me that you don't have more tables in stock???

Okay.  This week Antionette (yes, that's how she spells her name) called to say that they hoped to have the table shipment in by Friday.  I sent her a follow-up email asking to be sure to send the updated Control Panel for this machine.  By Friday I received a phone call saying, yes, the new control panel would be sent but the machine would have to be retested before shipping.  The table in the meantime, would be shipped first, on a pallet, which will be dropped in my driveway sometime next week.

Okay.  So I will get the table, lug it into the house, put it together (a challenge according to my Facebook friends who already received it) and the table will sit until the actual sit down machine arrives.

In the meantime, I'm working on updating the room that will become my bedroom.  I ordered new furniture, more on that later, had the drywall repaired, electrical repaired, and now I need someone to paint it a lovely shade called Planetary Silver.  Pictures to follow someday.  Maybe by the end of next week.

I'm going to be very busy clearing out things I don't need anymore.  Some things will go to Salvation Army, some to my children, and other things to garbage.  Wish me luck!
Posted by Suzanne at 9:31 PM No comments:

Six months ago today I was racing out to my Mom's apartment after my sister Renee was unable to reach her.  It wouldn't have mattered if I was driving 100 mph, Mom was already gone.

I'm more fortunate than some, less fortunate than others.  I'm not in any hurry, but I do look forward to the day when we are reunited.  Oh the stories we'll share.

She'd be cheering on the Wings and the Tigers tonight.  Wait, she's cheering from heaven -- they better win!
Posted by Suzanne at 8:47 PM 2 comments:

My list of quilting commitments is slowly decreasing.  Today I gave away a baby quilt to my boss.  I think I scored a couple LOT of points, even got a hug, because I used Buffalo Bills football fabric as the backing.  I didn't have a gift bag so this morning I thought 'hey, I've got a half yard leftover -- I'll whip up a bag'!  And I did.  Sometimes I'm just so thrifty!
I washed the quilt last night, just in case, and I'm so glad I used two Color Catchers in the wash load.  The white strips in the quilt would certainly have been pink had I not used them.  Here's a picture of the sheets next to an unused white sheet: 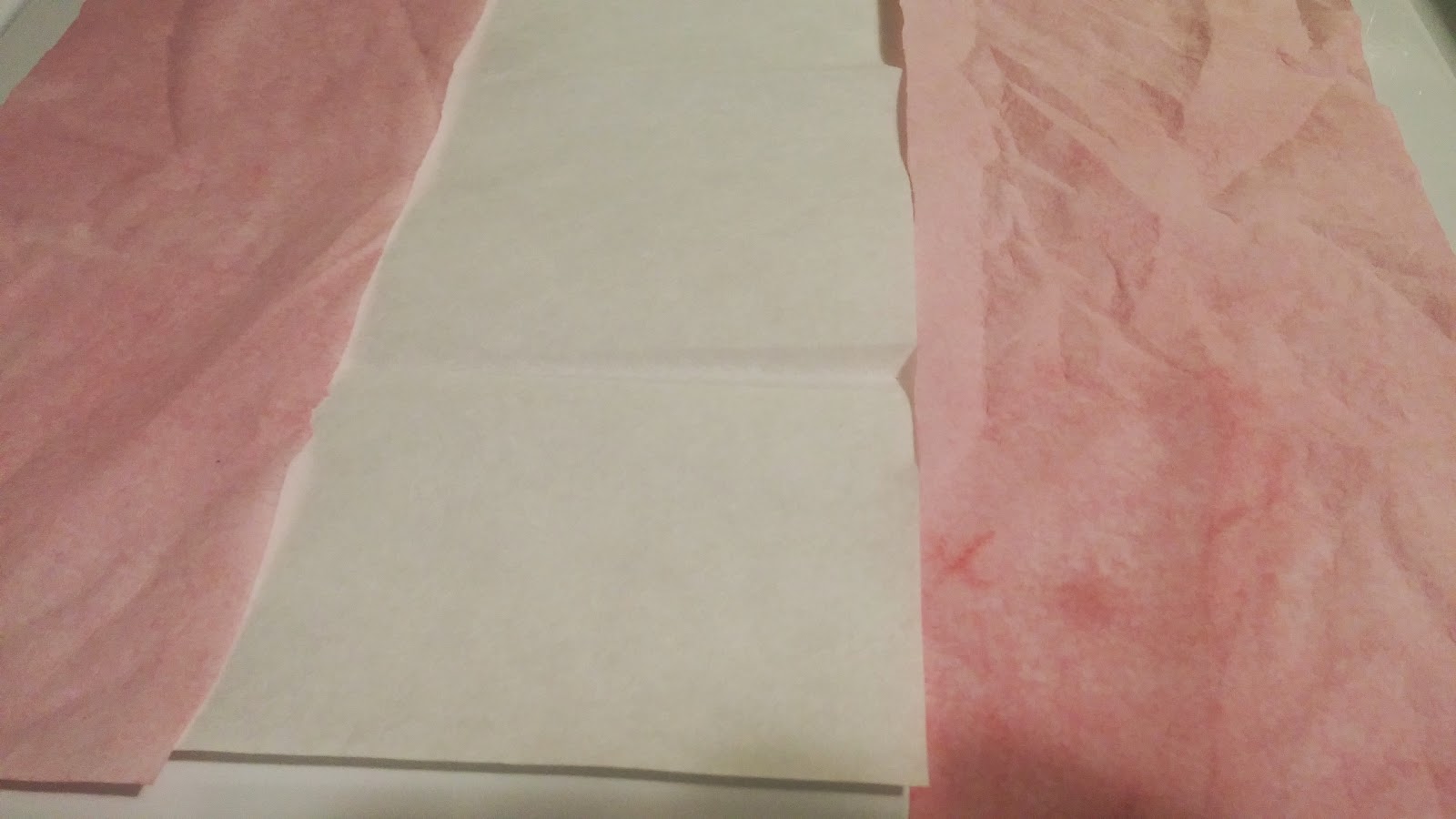 Here's the quilt, front, close up of the quilting, and the Buffalo Bills backing: 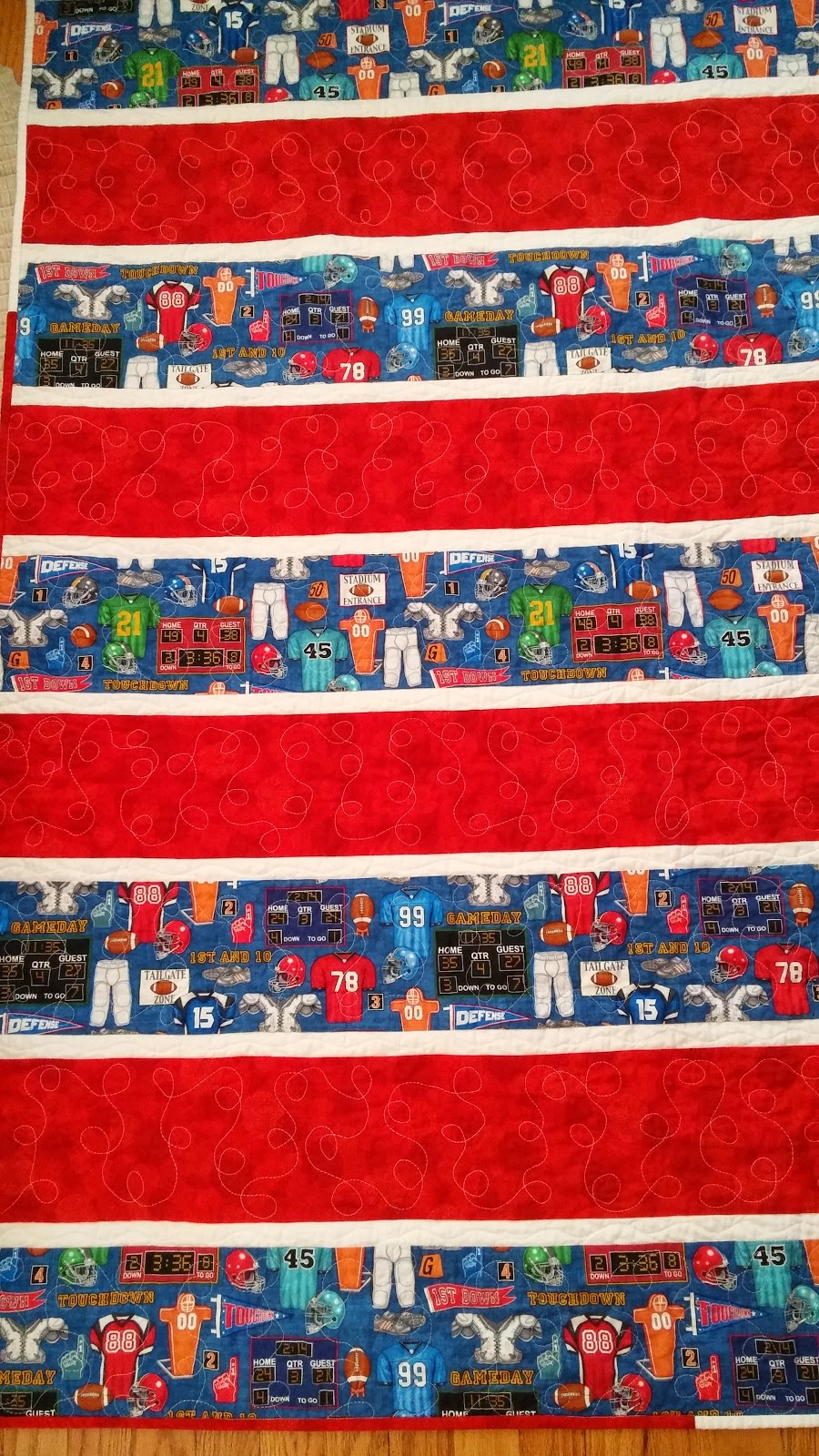 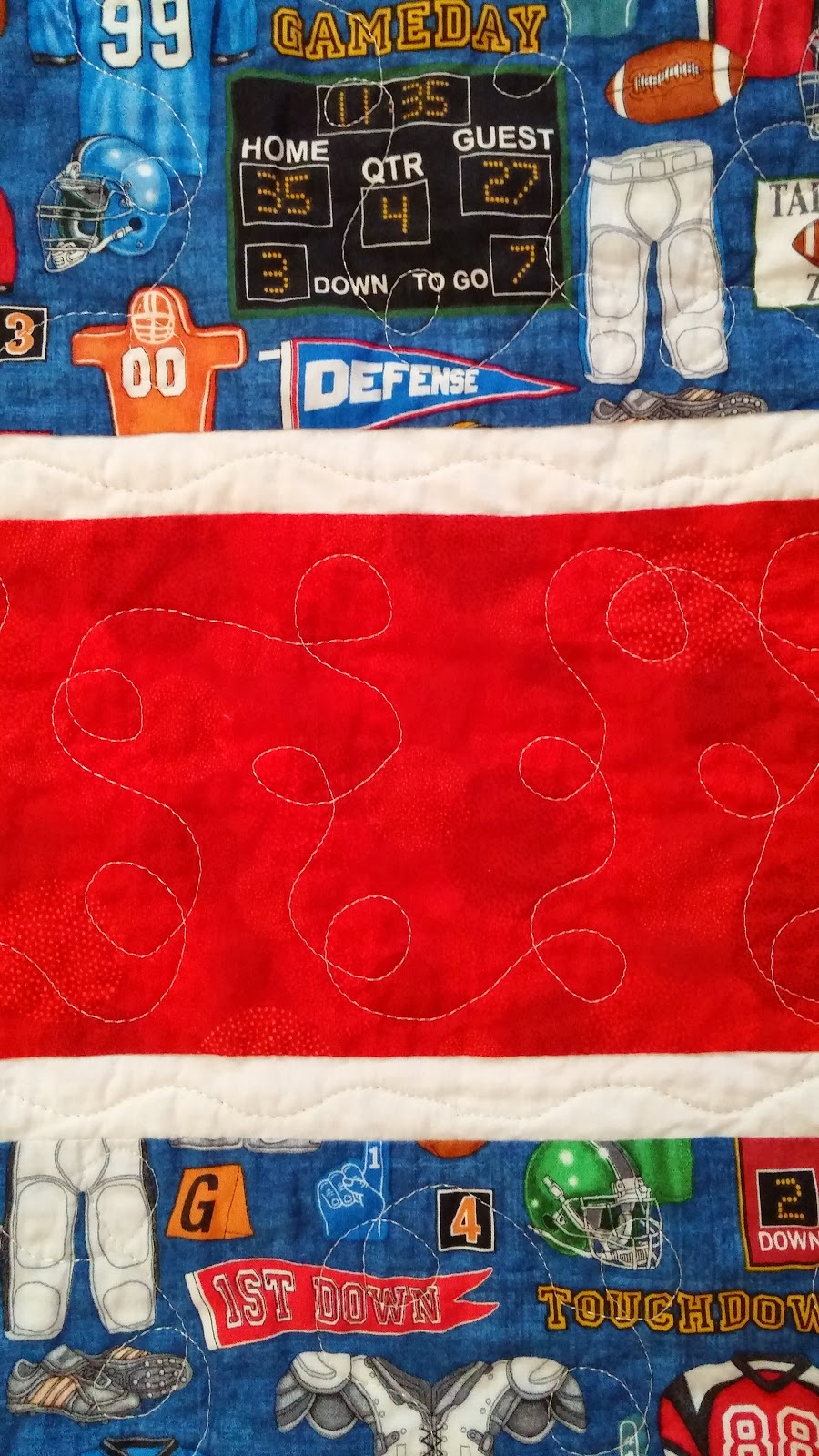 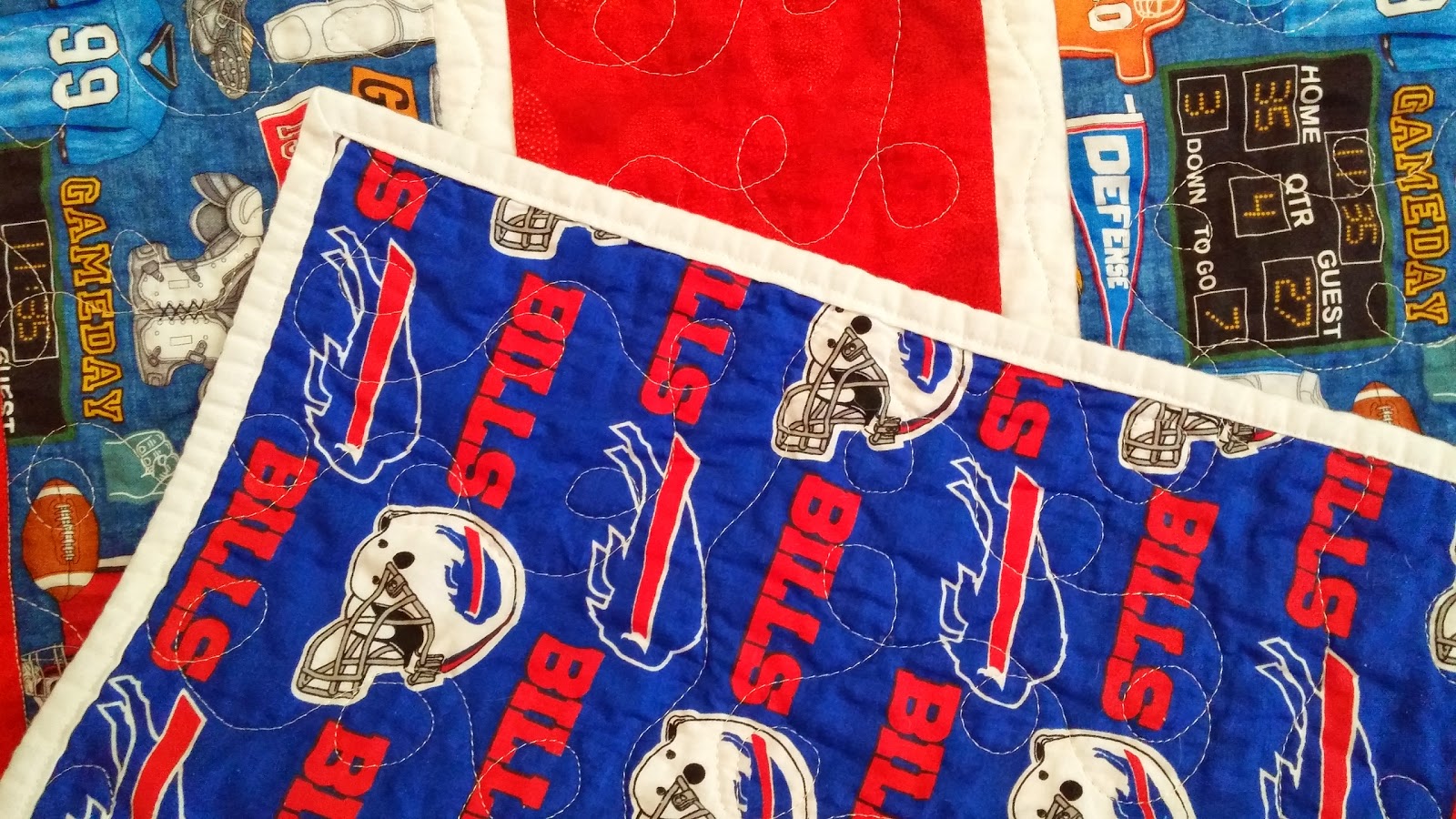 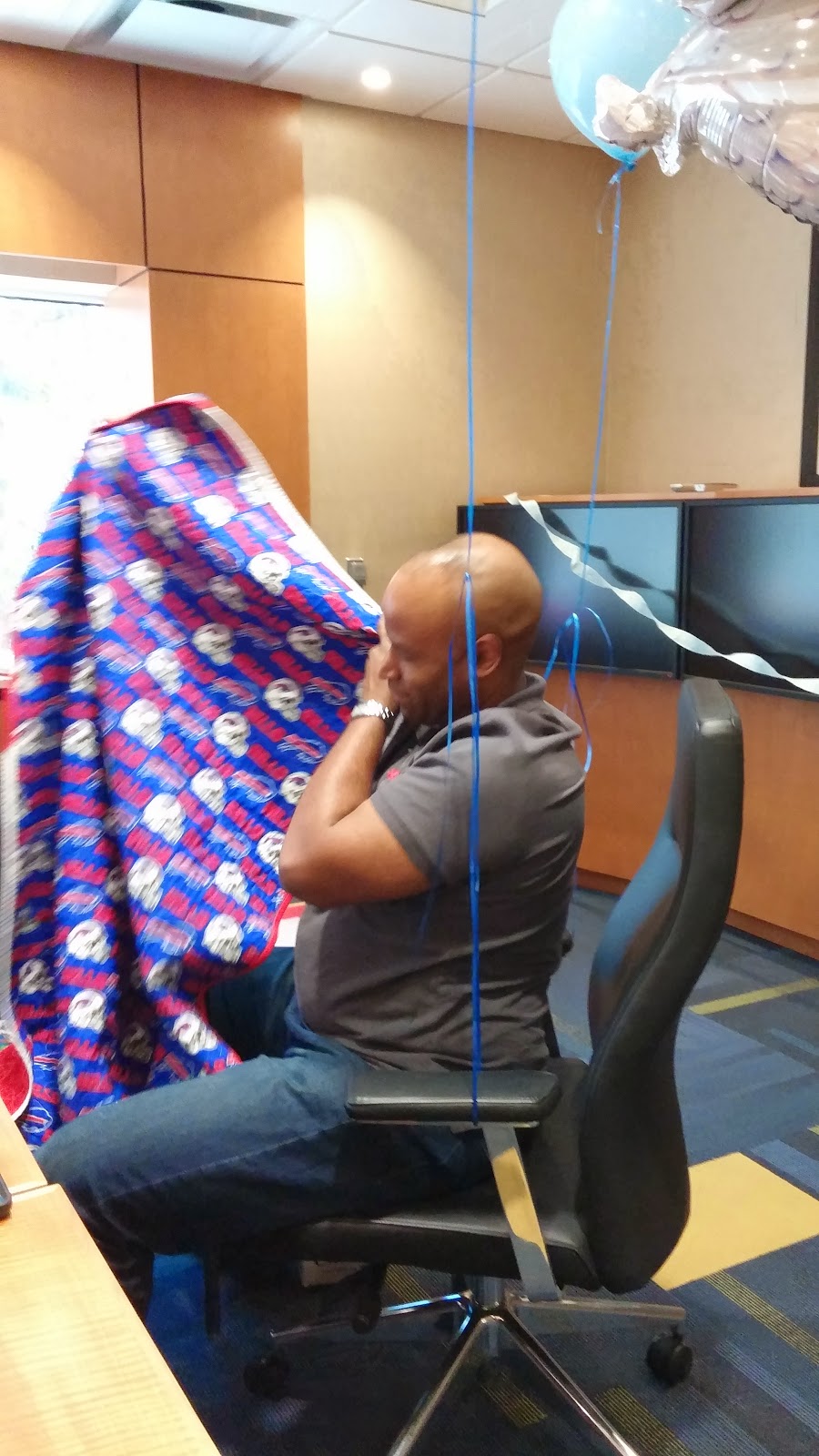